Everyone is talking about the now iconic "The Situation Room" photograph.  It has become an instant classic.  One of those photos like the "Murder of a Vietcong by Saigon Police Chief" by Eddie Adams (1968) or "Raising the Flag on Iwo Jima" by Joe Rosenthal (1945).  But this one unlike those has a relationship and serves as the answer to another famous photograph taken at Ground Zero almost 10 years ago, "Raising the Flag at Ground Zero" taken Thomas E. Franklin of The Bergen Record (September 11, 2001).

The most recent installment captures President Barack Obama and his national security team in the White House Situation Room monitoring the live video feed of the capture and subsequent killing of Osama bin Laden.

Those following the story closely have written countless reports noting the President's intense stare. Then there was the debate about Secretary of State Hillary Clinton. Was she covering her mouth to repress her horror or a cough brought on by seasonal allergies?  Most recently, Jewish newspaper, Der Tzitung photoshopped Secretary Clinton out of the iconic image in place of an empty chair, a practice not uncommon in the Orthodox Jewish community.

But what's the big fuss after all?  Its just a picture at the end of the day right?  A closer look however reveals not just another photo but rather an illustration of the new American landscape a paradigm shift from generations past where race, gender roles and even Presidential etiquette was so squarely defined.

The recent release of data collected from the 2010 U.S. Census reveals the color spectrum in America has changed.  We no longer live in a Two-Race, Majority/ Minority society but rather a multicultural, multi-ethnic society with gradients of scale.  The election of Barack Obama to the Presidency not only represented a milestone but like Jackie Robinson 60 years previous it marked the end of an era.

Marketers must now account for these differences.  Its no longer out of the rhelm of possibility to target an African American market for highly affluent products.  With an average Household income of $90,429, the Asian-Indian is a major player in the buying power game.  Gone are the days when the Hispanic audience was one only to be sought after by dollar stores.  The LGBT (Lesbian Gay Bisexual Transgender) community no longer has to retreat to its corner in the closet.  Instead they have ascended to corporate positions of prominence in many industries and must be accounted for any comprehensive marketing strategy.

The bottom-line is stereotypes have been broken.  The work of the marketer is no longer as easy as drawing cross-hairs on the backs of the largest populous.  Instead, creativity and an intently researched understanding of the people formerly known as minorities is a pre-requisite of successful marketing campaigning.  Those unable or unwilling to accept this....well they themselves will shop at those dollar stores, cower in closets and be out of a job.  You don't need an iconic picture to tell you that. 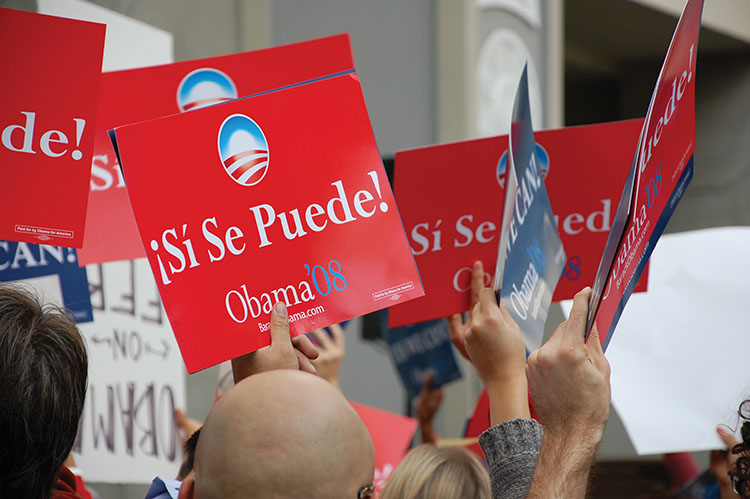 The Presidential Election: A Case Study in Hispanic Diaspora Marketing