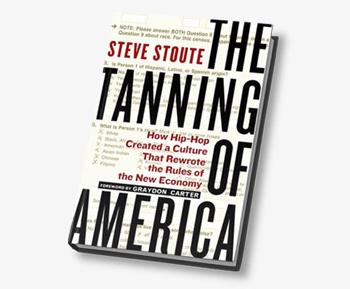 @SteveStoute I have a lot of respect for Steve Stoute.  No he was never a rapper (at least not that I know of) and he doesn’t wear sunglasses inside or sport $1500 jeans around his knees but he’s a great media mind with a hip hop network (I was going to say Rolodex but they’re not really around anymore.)  The global impact that hip hop has had not only on mainstream culture but on advertising budget allocation has always been fascinating to me.

In Stoute’s new book, The Tanning of America he discusses how Hip Hop, and the music that defines it, has increasingly impacted the general market advertising industry and not just niche discretionary budgets.

“I was inspired by…watching the images that were portrayed in advertising and seeing how they haven’t changed much,” he Forbes Magazine. “This younger consumer was no longer seeing the world the same way it was seeing it the generation previously. And I wanted to write a book about that phenomenon.”

Today we most commonly associate “tanning” with the GTL generation characterized by the Jersey Shore kids but as Stoute describes, tanning is also “a mentality that no longer determines your ethnicity, no longer determines what drives you spiritually or culturally, [that] comes from the shared values of other people.”   In other words, Hip Hop is the Jackie Robinson of music.  There are no color boundaries.  Kids no longer see their friends as being white or black but hip hop or not and Stoute’s book seeks to highlight the fact that his success and the long-term ability for advertisers to reach the Hip Hop 2.0 generation hinges on their ability to target the culture and not the race.

Stoute also warns ad executives from thinking that just throwing a rapper in a commercial or hitting play on your hip hop ipod playlist will make your product sell.

“You can’t assume that people just want to sit around dancing and drink soda,” he explains. “Play the music, drink the soda … there’s nothing about it that’s compelling except for, ‘Look, Pitbull is doing it, so you should do it, too.’”

I couldn’t agree more.  Highbrid Media has always made it a core responsibility to educate our clients on the fact that acceptance in Hip Hop or any ethnic audience for that matter means not only studying what it looks like and emulating in your ad creative but also displaying a fundamental understanding of the marketplace.  Every culture has a language.  They might speak English but if you can’t decode their dialect in and speak it fluently in your advertising you’ll ultimately flop.

I have yet to read Stoute’s book but I’m excited to say that its on its way from Amazon as we speak.  I am however somewhat surprised that he would be so giving of the secrets that have clearly made his successful as a very small but specialized fish in a big pond.  On the other hand, with the still shocking lack of respect for the power of the Hip Hop brand in corporate culture his secrets will be safe, tucked between the paper’s lines.